The Crab Monsters (real name unknown) were a race of creatures that The Time Traveler encountered farther into the future than Mor. During this time one almost attacked him.. ("The Time Machine")

They had massive pincers, whiplike antennae, eyes on top of stalks, and complex multi-palped mandibles. They were also discovered by the Morlocks to be fully sentient. ("On the Surface")

They excrete a compound which binds sand together, creating materials as hard as stone, which they use to build their cities. They communicate with one another through high-pitched sounds which are inaudible to Morlocks, and through gestures with their antennae. ("On the Surface") 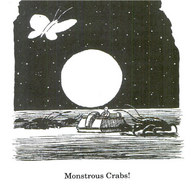 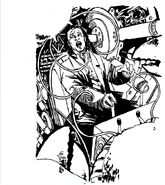 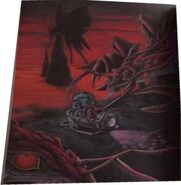 Add a photo to this gallery

Retrieved from "https://timemachine.fandom.com/wiki/Crab_monsters?oldid=5844"
Community content is available under CC-BY-SA unless otherwise noted.