The Morlock Sphinxes are a series of structures on the surface of the Earth in the Mor era, belonging to the Morlocks. It's unknown whether they were created by the Morlocks or by earlier Humans, but the Morlocks maintain them.

The morlock sphinx is made of white marble with the face of a woman, the body of a lion, and the wings of an eagle, lying on a large bronze base with a single sliding panel as the entrance to the Morlocks underworld. The sphinxes are imposing structures, which the Eloi generally avoid. They are all entrances to the underworld Morlock caverns. ("The Time Machine")

This sphinx was an imposing stone structure whose head resembled that of a Morlock but represented in an abstract style. It was outfitted with sirens whose original purpose was to warn humans who had ventured out from the underground to the surface that a bomb or other catastrophe was threatening and that they should return underground for safety. By the year 802,701, however, the sirens were used to cull the Eloi by making them march in a trance-like state into the Sphinx's entrance. ("The Time Machine")

The Morlock Sphinx is a single structure made of iron, and resembles a Morlock skull with large iron teeth. The structure's mouth serves as its entrance. Alexander Hartdegen went inside of it to rescue Mara and the other Eloi after they had been captured by the Morlocks. ("The Time Machine") 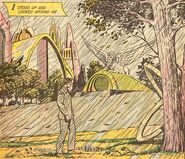 2002 Film.
Add a photo to this gallery
Retrieved from "https://timemachine.fandom.com/wiki/Morlock_Sphinx?oldid=5995"
Community content is available under CC-BY-SA unless otherwise noted.