The art in the comic series is, at times, a departure from previous depictions of The Time Machine. For example, Weena and the Eloi are no longer depicted as pale and blonde, as they are in the 1960 film. 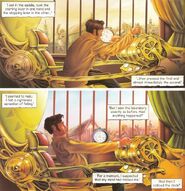 The Time Traveler experiments with his new machine. 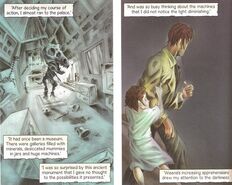 The Time Traveler and Weena explore the Palace of Green Porcelain.
Add a photo to this gallery
Retrieved from "https://timemachine.fandom.com/wiki/The_Time_Machine_(Campfire)?oldid=5215"
Community content is available under CC-BY-SA unless otherwise noted.